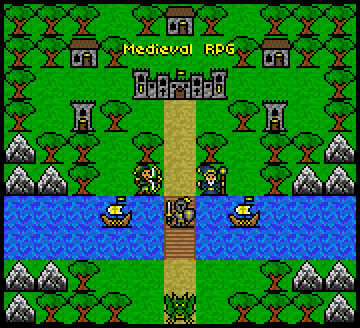 Medieval RPG (working title) is a turn-based Retro RPG game set in the medieval time period. This game is currently still in development.

Discover an adventure that awaits as you explore an enormous open world with more than 10 unique biomes such as forests, grasslands, snowy tundra’s, lakes, deserts, beaches, castles, and underground dungeons. Quest and travel to over 100 separate locations consisting of towns, kingdoms, castles, and caves. Use swords, bows, and magical spells to fight monsters as each character has it’s own combat level, experience, stats, and equipment with 11 tier levels of armor and weapons. Gain Skill Points to level up your character’s Strength, Defense, and Hit Points by fighting in battles with over 50 different creatures. Collect gold and loot received from battles, use potions to regain your health and magic, and buy and sell items from local shops as you work your way up to achieve the mastery Level 100 Combat. Compete with other players locally and across the world with online leaderboards and achievements.

Your adventure is just beginning…

Looks Great, reminds me of Gurk, can’t wait to play it when it comes out.

A while ago there used to be a playable demo on the site but it’s gone and I can’t play it anymore unfortunately.

Gurk and Runescape were both big influencers to the style of this game. Unfortunately, this project has been on the back-burner the past few years, but hoping to get back to it in the *nearish* future and when that happens, I’ll get another demo posted up!

We use cookies on our website to give you the most relevant experience by remembering your preferences and repeat visits. By clicking “Accept”, you consent to the use of ALL the cookies.
Cookie settingsACCEPT
Manage consent

This website uses cookies to improve your experience while you navigate through the website. Out of these, the cookies that are categorized as necessary are stored on your browser as they are essential for the working of basic functionalities of the website. We also use third-party cookies that help us analyze and understand how you use this website. These cookies will be stored in your browser only with your consent. You also have the option to opt-out of these cookies. But opting out of some of these cookies may affect your browsing experience.
Necessary Always Enabled
Necessary cookies are absolutely essential for the website to function properly. These cookies ensure basic functionalities and security features of the website, anonymously.
Functional
Functional cookies help to perform certain functionalities like sharing the content of the website on social media platforms, collect feedbacks, and other third-party features.
Performance
Performance cookies are used to understand and analyze the key performance indexes of the website which helps in delivering a better user experience for the visitors.
Analytics
Analytical cookies are used to understand how visitors interact with the website. These cookies help provide information on metrics the number of visitors, bounce rate, traffic source, etc.
Advertisement
Advertisement cookies are used to provide visitors with relevant ads and marketing campaigns. These cookies track visitors across websites and collect information to provide customized ads.
Others
Other uncategorized cookies are those that are being analyzed and have not been classified into a category as yet.
SAVE & ACCEPT
wpDiscuz